Irfan and I had a discussion on noise in our receiver for body-coupled communication and the fact that noise is built up in the receiver chain.

Just for the sake of argument I calculated the noise in a simple RC integrator to illustrate how you have to select the lower end frequency. Such a block has a DC gain of infinite, which means that low-frequency components are dramatically amplified. The transfer characteristics is 1 / s R C , where s is your frequency variable.

The same holds for 1/f-noise. If you want to find the total noise power of flicker noise, you have to integrate down to 0 Hz which will give you an infinite value. People tend to find this problematic. However, the same actually holds for thermal noise. If you integrate all the way up to infinity you also end up with infinite noise power. Both of them are of course models and in reality there are other things to the models as well as band limitation, etc.

So, just some scribbles with a few tricks associated with them such that I can refer to this page for later use. And I hope I am not wrong now 🙂 please help me to correct the equations then …

The noise model of the resistor (thermal noise) is given by an voltage source describing a noisy process with a power spectral density (PSD) of 4 kT R. k is the Boltzmann constant. T is the absolute temperature (in Kelvin). (Notice that it is single-sided noise spectral density.) According to superposition (for linear circuits), we ground the input signal and just look at the contribution from the noise.

Plugging in the values gives us a rather compact description of the output noise PSD. It is described by an 1/f-square characteristics at the moment.

Let’s integrate that in order to get some idea of the total output-referred noise power (the input-referred noise PSD is already known…). As per Parseval we can find the power of the noise as the integral from some start frequency (which could go down to 0, but let’s wait with that) up to infinity.

By introducing the f0 lower-end frequency and also the time-constant (tau) of the RC integrator, we can further compact the description of the output noise power. We see now that the power is inversely proportional to the RC time constant, to the capacitance, and to the lower-end frequency.

The lower-end frequency can be expressed as the inverse of the maximum expected time of operation (sort-of). Assume you turn your device on for one day. The lowest changing frequency is then 1/86400 Hz. 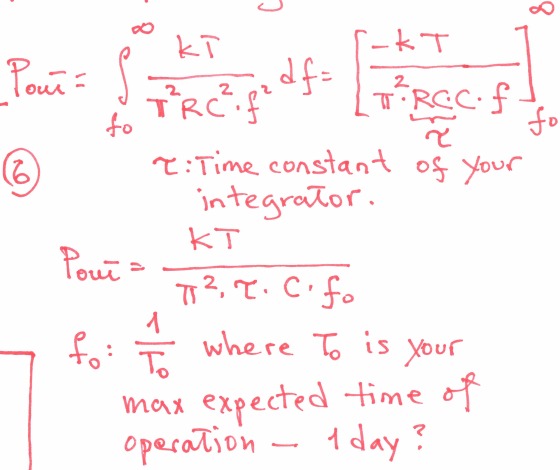 Now, some “tricks”. The kT factor is found here and there in our designs. At room temperature, this is approximately 4e-21. A handy number to remember. Further on, pi-squared is approximately 10. Eventually, we land at something rather compact again. The longer time our device is on, the more noise power. The higher capacitance the less noise (which is something we also learned in day care centers). 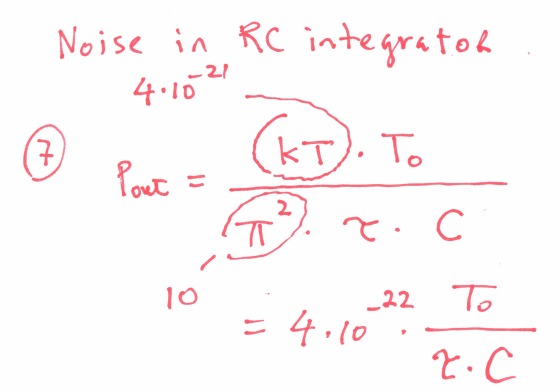 With some example values inserted: assume a time constant of 1 ms and a 1-day operating time, the output noise power can be calculated to have only the capacitance (or resistance) left. 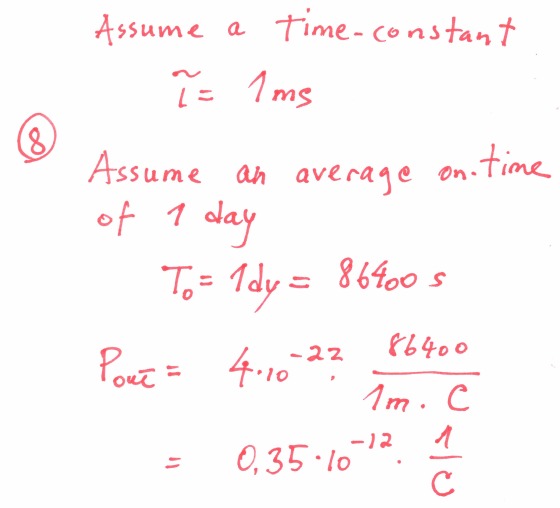 With a 1-microfarad capacitor, the resistance becomes 1 kOhm and the output power is 0.35 microwatt. 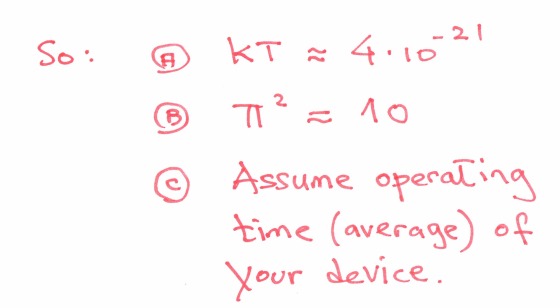 3 thoughts on “Noise in an RC integrator”